The API Economy Impact on Payments 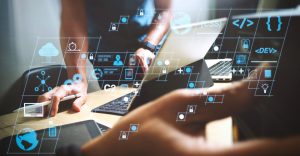 We live in an API economy where organizations are increasingly adopting an API-first approach to remain agile and future-proofed. In the payments space, APIs drive real business value in the form of improved customer experience, reduced costs, and innovation.

In simple terms, an API serves as a piece of code that connects and enables the access and sharing of data and functions between programs and digital environments. In other words, APIs are interpreters of sorts. These connections make it increasingly seamless to scale data sharing, order processing, and communication.

APIs are widely used, with Gartner estimating that APIs perform 25% of all B2B interactions — a rate that is on the rise. These digital intermediaries help developers pull in data from external sources and streamline processes in the background. So what does that have to do with payments?

APIs are not new; the push toward Open Banking has been in progress for a while and was solidified in the European Union when the EU Payment Services Directive PSD2 came into effect in January 2018. APIs then became enablers for third-party developers to build applications and services around a financial institution. This means that consumers, merchants, and businesses gain more efficient access to a variety of services, one of which is payments.

APIs and the Path to Frictionless Payments

SWIFT, the global provider of secure financial messaging services, recently announced a strategy for a next-generation digital platform aimed at transforming payments and securities processing, facilitating frictionless and instant end-to-end transactions that are predictable and transparent. The enhanced platform will leverage cloud technology and APIs to offer common processing services to coordinate interactions between financial institutions and other entities.

Lag and lack of speed is just one friction point for payments, but it is a big one. While many payments companies and platforms are already attempting to address this issue, there are still hurdles to overcome. Venmo is a great example of a platform that has risen sharply in popularity for seemingly solving this problem among peers. Users can “instantly” send and receive funds through the platform via wallet-based network transfers. What many don’t realize, however, is that the transfer still has a settlement lag, which impacts the availability of funds. Not only is this frustrating, but it can lead to increased fraud.

B2B payments face their own hurdles, but APIs will play a key role in solving for the biggest pain points. While open banking is not a mandated initiative in the U.S., those in the payments space that are aiming to eliminate friction should be focused on APIs. The connectivity to banking platforms as well as internal systems and other technologies will be integral to creating winning payment technology.

There is a difference between leveraging APIs and leading with an API-first approach. Banks can often find themselves hamstrung by legacy core systems, which they attempt to remedy by adding on APIs. The problem is that these integrations are less agile than API-first platforms. They may provide a way to achieve certain objectives, but the results can be messy and fraught with confusion and frustration.

API-first architecture is an approach to software design that focuses on the API in an effort to create applications that seamlessly interface in a modular and reusable way. New features can be easily added as independent services that are accessed via API, which is a way to future-proof applications. An API-first approach requires strong API documentation that can be accessed by all teams. As businesses (and consumers) continue to become more interconnected and as the cloud becomes the platform of choice, the ability to easily add in features and connect them to applications will become paramount. This is how rich experiences can be delivered to users across devices and platforms.

Payments companies don’t have to look far for shining examples of API-first platforms. Stripe, Plaid, and Segment — all with valuations of over a billion dollars — are API-first platforms. APIs make things happen behind the scenes, which can make them a less appealing business case for those looking for flashy appeal. That said, an API-first approach can directly impact the bottom line by improving customer experiences, cutting development costs, facilitating faster time to market, and supporting the creation of innovative products and services.