The Basic Tenets of IaC that Help in Cloud Enablement 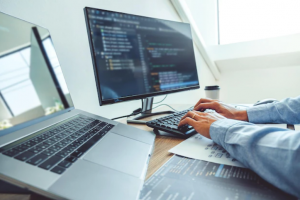 The level of software development has reached a place where the need for physical data servers has been bypassed. But to truly leverage the benefits of the cloud, all the resources and management of those resources need to be in the cloud. Here’s what shifting your development infrastructure to the cloud entails.

With the advent of cloud computing, IT teams have built and deployed automated applications. This has led to the introduction of server configuration automation through IaC (Infrastructure as Code), which helps take that process one step further. The purpose of codifying cloud server infrastructure management is to fasten error-free deployments to attain the desired scale of operations. It will help most organizations stuck in the mid-evolution phase to step out and go beyond. This is precisely why IaC is one of the most important innovations for improving the DevSecOps workflow.

This article will discuss the core tenets of IaC and why it is essential for your cloud-based applications.

IaC is a framework-based approach to web development. When the resources become too bulky at a specific operational scale, each environment seems like a snowflake in the crowd of distinct environments. This leads to the fundamental problem of recreating environments for subsequent deployments. The solution is automating the server and resource management process through IaC. It uses simple instructions that can be automated, thus enabling you to manage dependencies and deployments of your application.

With IaC, you can create a server and configure it automatically using pre-defined templates. This is especially useful for creating new servers when you need them. It is an open-source project developed by many industry participants and is still undergoing rigorous enhancements. It allows developers to create high-performing web applications while also being agile. At the heart of the DevSecOps cycle is the immutability of the infrastructure because that ensures effectiveness and security. While work is still being done on that account as security is forever evolving, user provisioning features such as Role-based Access Controls (RBACs) act as a gateway to your servers.

Bypassing the Possibility of Human Error

The bigger problem in current times and the foreseeable future is not managing multiple cloned machines but running varied quantum of resources on a single virtual machine (VM).

The following are some of the principles that help in reducing costs:

Costs can also be optimized by reducing system failures while preparing to solve the issues sooner. IaC has been able to reduce the misconfiguration fixation period by up to three times, from over three days to under one now. This time and money saved means a lot to the business.

As a simple example, let’s say you have designed your deployment using IaC tools. You can change the number of instances in the code without changing any other configuration files. This is extremely useful when deploying to multiple cloud environments such as AWS, Azure, and GCP.

Additionally, let’s say your application needs to scale up or down based on traffic or load-balancing requirements. In that case, you could use IaC to do so quickly and easily by updating the code at runtime rather than making changes manually through web consoles (like AWS). The benefit is that it saves time and keeps your team focused on building new features rather than tweaking existing ones for scaling purposes.

Handling the Complexities of Server Environments

IaC is a great way to handle server environments and cloud storage complexities. It allows you to build applications faster without worrying about the underlying layers. IaC is a powerful tool that will enable you to create servers on demand and manage their lifecycle in an automated way. With IaC, you can easily spin up new servers on demand, configure them, and tear down old ones when they are no longer needed.

The primary benefit of IaC is that it is a framework-based approach to web development. As a result, you can build websites and applications without worrying about server environments and cloud storage complexities.

The best part? It’s scalable, so you don’t have to worry about your sites going down whenever there’s a sudden traffic spike or another unexpected event.

If this seems like a reasonable proposition for your organization, then do reach out to our team or watch this webinar recording on how IaC can help you fast-track digital transformation.